Buy Backcountry Skiing: Mt. Baker, WA here and save money versus purchasing from within our app via Apple or Google. It’s exactly the same guidebook, but offered at a lower price on rakkup.com.

How does a solid 7500 vertical foot ski descent from the top of a steaming volcano, with views of Canada, the San Juan Islands, and the heart of the North Cascades sound? If this sounds like your kind of thing, Mount Baker is your kind of mountain. Mount Baker, originally known to the Lummi as Komo Kulshan, aka the White Sentinel, was first sighted by the Spanish in 1790. 2 years later Captain George Vancouver discovered passage into the Salish Sea and the great renaming began with giving Kulshan the name: Mount Baker, after his lieutenant Joseph Baker who was the first of his crew to spot the volcano.  Locals discovered powder skiing in 1927 and the ski area opened in 1929.

The first uninterrupted climb and ski descent was achieved in 1933 by Hans Otto Giese and Don Fraser of the Seattle Ski Club. Apparently, they summited in 6.5 hours, and descended 6,750 feet in 30 minutes. Looking back on the particular gear they must have been climbing and skiing with, it is certainly humbling to think of the challenges men like these had to face in order to accomplish such high adventure with success. 90 years later passion to ride now is shared from Vancouver BC to Seattle driving up hwy 542 every weekend from November thru April to ride the biggest storms in the NW! 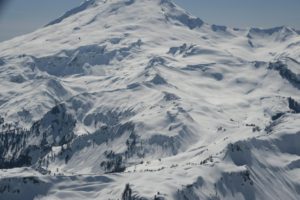 Ptarmigan Ridge beckons those looking to reach a little farther 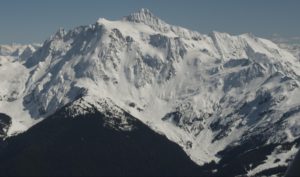 What is one part of the avalanche recipe that never changes? Terrain. Terrain is the only constant. With Backcountry Skiing Mount Baker and Rakkup’s powerful planning and execution tools, you can read your run the night, week, or month before. Refer to it as you travel through the field, assess your conditions, and adjust your plan as necessary.