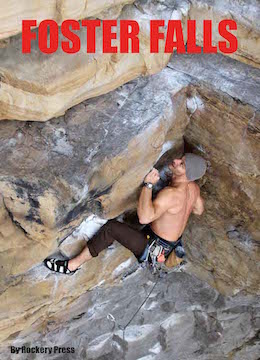 Foster Falls is named for the unmistakable 80 foot waterfall that drops dramatically into the Little Gizzard Creek, a smaller stream that is part of a larger network of coves and creeks that make up the impressive Fiery Gizzard drainage. The developed cliff at Foster Falls is owned and managed by the South Cumberland State Park which manages several near-by natural attractions that are frequented by hikers and outdoor enthusiasts of all ages. For the Rock Climber, however, Foster Falls rock climbing is the crown jewel of the South Cumberland State Park - offering almost 200 high quality sport climbs on superb Southern Sandstone. The long cliff sits in a southeasterly orientation and serves as a year-round climbing destination. In warm weather months, walls in the interior of the drainage (closer to the falls) remain shaded by towering hemlocks and broad-leafed magnolias that offer a break from the summer sun. In colder months, the south facing walls further out from the falls offer tall and exposed routes that make for great winter outings. The cliff averages sixty feet in height - with many routes that are taller, and shorter. The climbing ranges from jug laden slab climbs to quadruple stacked tiered bunkers. Because of this, Foster Falls possesses the greatest variety of sport climbing found in the Chattanooga area with new routes popping up all of the time. For this reason, it is among the most popular cliffs in the region. This initial release contains 174 climbs and will be updated when new routes go up.