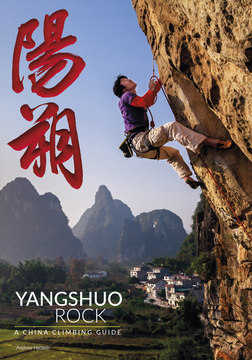 The Yangshuo Rock digital APP produced in conjunction between Andrew Hedesh and Rakkup.com incorporates the best rock climbing within 15km of Yangshuo, China. This APP is an extension of Andrew’s past four years in which he researched the nuances of navigating through the Yangshuo countryside and every detail of 750+ routes included in the recently released paperback book Yangshuo Rock - A China Climbing Guide.

The Yangshuo Rock Digital APP is a wonderful companion or stand-alone product for every climbers’ need while visiting Yangshuo. With exception to travel information and the historical timeline, the Yangshuo Rock Digital APP has everything else including plenty of local flair and personality. You won’t encounter any trouble while navigating the perils of law-breaking traffic, endless rice fields, nor the maze of similarly shaped karst towers to arrive at the climbing crags of your dreams. The Yangshuo Rock Digital APP will be continually updated with lesser known crags, new routes, and current development projects in an effort to create a complete guide totaling more than 60 crags and 1000+ routes.