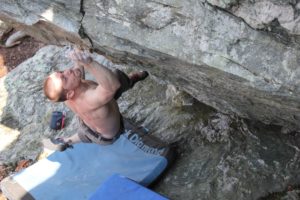 Adam Sokolow first got into climbing while a freshman at SUNY Buffalo. At the time he could not foresee how addicting and important a climber’s life would become to him. Perhaps what drew him in was that soccer and running was not very kind to his knees and climbing was the obvious low impact sport. Or maybe it was an inability to adapt from the N64 to the new dual-joystick plus 6 buttons in the gaming console world. Maybe it was just the ample free time, close proximity to the Niagara Climbing Center and bad emo music. Anyway you look at it, all of the ingredients for making climbing a true obsession were there.

Like any good gym rat, he sought out the best of the best in climbing gyms. When he moved to North Carolina in 2005 to attend physics graduate school at Duke University, the best climbing gym in the area was the Raleigh Rock Yard. The Rock Yard did not look like much, but it produced some incredibly strong climbers and it’s where Adam met the 2005 who’s-who of Raleigh climbing including JP, Rodney, Nate, Rami, Gabe, and many others. Most importantly this group frequented Moore’s, amongst other local areas, and were willing and wanting to share and not hide the area from others.

Adam on Blinded by the Hype-V8

It’s unclear when the mental transition occurred, but for a long time climbing was just an outlet, workout or past time. Maybe it was the constant prodding from Gabe, JP, and Summer to join them in the boulderfield, maybe it was just more bad emo music, but at some point, intermittent trips became weekly endeavors and within no time climbing outdoors, especially at Moore’s, became an obsession. Adding fuel to the fire, Triangle Rock Club was the first true gym for the area with an eye for quality and training. Not betraying his gym rat roots, Adam became one of the first route setters at TRC and advocated strongly for JP, Rodney, Rami, and Gabe to be added on as setters as well. Largely driven by the pack of outdoor-climber-route-setters, TRC quickly became the Raleigh hub for the climbing scene, bringing in new climbers, and providing couches for gossip.

He undertook writing the first comprehensive guide for the area to share it with others just as it was shared to him. This guide is a tribute to Moore’s Wall, the stories, the climbers, and the experience.