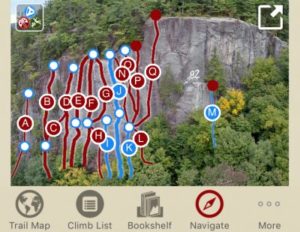 …As I continued on the steep switchbacks of a work road, I ran into some No Trespassing signs. It was at that moment I remembered that I had a guidebook in the Rakkup app on my iPhone. Embracing the new technology, I put the first edition print back in my pack and clicked through the trail guide. The GPS showed I was slightly off course, so I wandered back and hit the go button to navigate to the top with some turn-by-turn.

We’re proud to be mentioned in this WSJ article: Bouldering in the City: The Best Gear and Apps 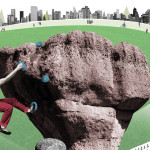 Bouldering in the City: The Best Gear and Apps

The Apps | Short of befriending an experienced urban boulderer, consulting an app is probably the easiest way to learn about climbing routes near you. “Mountain Project” and “Rakkup,” both available free on iOS and Android, catalogue thousands of climbing routes, and work offline once data is downloaded.

The key difference between the two is that the 100,000-plus climbs in Mountain Project are sourced from the app’s users, whereas Rakkup’s nearly 24,000 climbs (available through in-app purchases) are culled from the company’s digital guidebooks, which are written by local climbers.

We’re proud to be mentioned in this WSJ article: Bouldering in the City: The Best Gear and Apps was last modified: July 27th, 2016 by todd 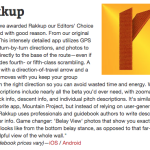 Climbing Magazine’s must have climbing apps.

We have come a long way since the Editor’s Choice award, and we appreciate the recognition.

In 2014, we awarded Rakkup our Editors’ Choice Award and with good reason. From our original review: “This intensely detailed app utilizes GPS tracking, turn-by-turn directions, and photos to get you directly to the base of the route—even if that includes fourth- or fifth-class scrambling. A compass with a direction-of-travel arrow and a map that moves with you keep your group heading in the right direction so you can avoid wasted time and energy. Wall and route descriptions include nearly all the beta you’d ever need, with zoomable topos, rack info, descent info, and individual pitch descriptions. It’s similar to our other favorite app, Mountain Project, but instead of relying on user-generated content, Rakkup uses professionals and guidebook authors to write descriptions and gather info. Game changer: ‘Belay View’ photos that show you exactly what the route looks like from the bottom belay stance, as opposed to that far-away and unhelpful view of the whole wall.”

Thank you Climbing! was last modified: October 18th, 2015 by todd

Why is rakkup so awesome?

Why is rakkup so awesome? was last modified: April 8th, 2015 by todd 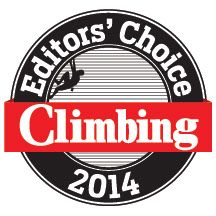 We’re delighted to announce that the editors of Climbing chose rakkup as a 2014 Editor’s Choice product! rakkup is a guidebook app for your phone, with powerful features and a growing range of available guidebooks for major climbing areas. See what Climbing had to say about rakkup in the 2014 Gear Guide. The rakkup guys have been reading Climbing gear reviews forever, so it’s great to see rakkup recognized for quality.  Huge thanks, Climbing! 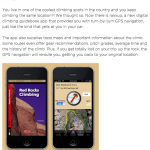 Thanks Verde PR for citing rakkup in your 10 apps to help you enjoy the outdoors!