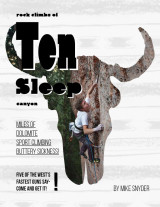 Dolomite pocket pulling, a wide variety of chill camping, beautiful scenery in an enormous canyon with mild weather nearly year round, seriously, what more could you ask for?

Ten Sleep Canyon has slowly but surely crept its way onto most peoples 'climbing destination' radar over the past fifteen years as more and more crags and routes have been added each season. Do you like 5.10 & 5.11 moderates? Are you a 5.12 crusher? How about one of those mutant 5.13 and up climbers? Ten Sleep has so many 5 star routes at every grade that everyone in the group will find their new favorite route at any of dozens of crags hidden/nestled in the forested canyon.

With some very plush FS pay camp sites and free camping spread out at all elevations you are sure to find a perfect place to pitch the tent or chock the tires no matter what season you choose to visit. The welcoming little town of Ten Sleep offers several eateries and a gas station, there's even a brewery that has camping and showers. The new Ten Sleep Rock Ranch, just minutes from the climbing, offers a variety of overnight options including an open but sheltered common area, bathrooms, showers, WiFi and even an indoor gym. The larger towns of Buffalo and Worland lie in either direction about 45 minutes away from the climbing when its time to restock rations.

The Rakkup Ten Sleep Rock Climbing guide book has an initial offering of some of the most popular areas along with some new and completely unheard of gems (psst, Crag 6). Nearly 800 routes of what has been described as the 'buttery sickness' will get you started. Longtime local and route developer Mike Snyder plans to continue to add more and more satellite crags until the guide is complete. Accurate trail maps, crag and route descriptions along with photos of each route and all the details will help you plan your trip or day of climbing.

2017 was the most prolific year yet for the sheer volume of new routes. Well over 100 new lines went in this year with many new faces leaving their signatures on Ten Sleeps dolomite cliffs. The Rakkup guide has many of these new lines and will continue to add them through updates as they go in and are opened by the equippers. Refresh the app, Go to the bookshelf, download new material, open, enjoy!

Ten Sleep has been the site of some egregious route manufacturing recently and sporadically throughout the years. In order to provide each Rakkup user with the best and most accurate information, each route in the canyon will be included regardless of how it was developed. Routes developed on Wyoming Big Horn dolomite are expected to be comfortized as has been the practice around the state for decades, however holds may not be created from nothing and the use Sika (glue) is frowned upon. Routes developed outside this ethic will be included in the guide because there are climbers that will happily go and climb them and those that will want to avoid them. They will be described the same as normal routes, however they will lose a star in the quality rating system. Each route known to be a manufactured route will say so in its description and each Area with a route of this nature will have it included in its description. 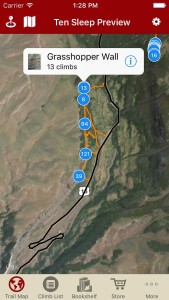 Explore Ten Sleep Canyon like it was meant to be explored via our interactive trail map. 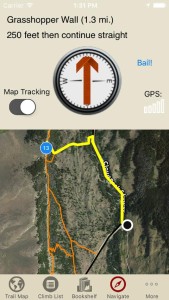 rakkup guides you car to crag then shows you a picture when you arrive. Awesome. 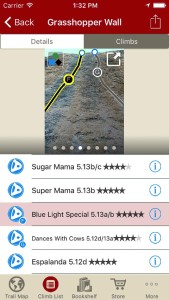 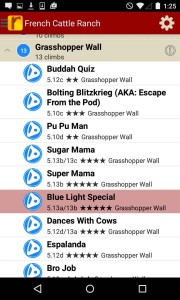 All the Ten Sleep climbs at your fingertips. 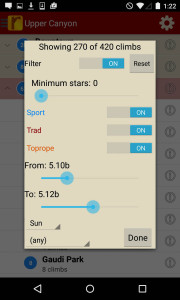 Sort all those climbs to only the grades you want to see. 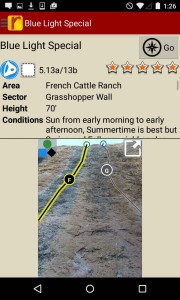 Use local, Mike Snyder’s beta to send your next proj!