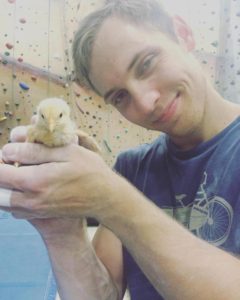 Kai Webler was born in Wendell Massachusetts, a stone’s throw from several Western Mass crags. At the age of six, his mother took him climbing for the first time – top roping at Rose Ledge. Rumor has it, he slipped off a hold, (presumably on ‘Cakewalk’ (5.4)) and caught himself by two fingers on one hand, dangling in space to the amusement of onlookers. It didn’t catch on.

Seven years later Kai started climbing again, this time in the safe confines of the climbing gym. He trained with the climbing team for several years, but never made much of himself as a youth competitor. Frustrated with the gym, and freed by his newly acquired driving permit, Kai spent every second of his free time exploring the woods of Western Mass, trying to make his way up every boulder he laid eyes on. 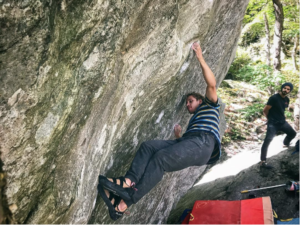 In the last eight years, Kai has climbed most of what Western Massachusetts has to offer, and has switched his focus to finding new rock and putting up new boulder problems. In the last few years, Kai has put up more ‘hard’ (V10 and up) boulders than anyone else in the history of Western Massachusetts bouldering. Now, as a senior in college, he has a bit less free time, but still manages to make it out to those places so special to him.