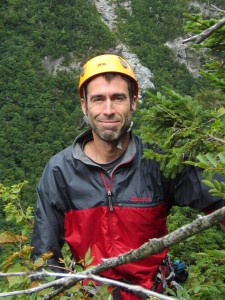 A native of the Green Mountain State, Travis has been exploring the northeast rock climbing for over 20 years. Climbing trips out west and abroad have brought him to 15 states, 8 countries, and 4 continents, but one of his favorite places to climb has been right here at home.

An activist in climbing conservation and access issues, Travis has served on the board of CRAG-VT since its inception. During his term as president from 2005 to 2010, CRAG-VT acquired Upper West and the Carcass Crag, and coordinated with the Vermont Land Trust to conserve the 82 Crag. 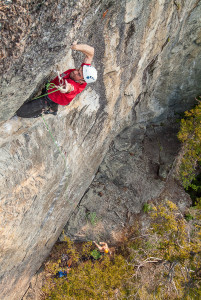 Travis Peckham on Doggfather (5.12b).

Travis has a degree in computer science from Boston University which he puts to use working as the CTO of a medical software company. He has a beautiful wife, Nancy, and two terrific children Phoebe and Flynn. When he’s not climbing, he enjoys trail running, mountain biking and snowboarding.