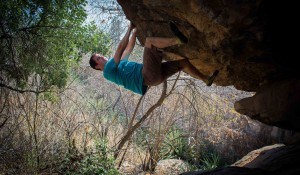 Working the moves on the Terapin Project (V8)

Growing up in Zimbabwe I have always been inspired by the massive Rock features you come across throughout the country. Hillside Dams in particular has been a special place for me. As a teen I often spent time there escaping from the city. We would scramble up the rocks and enjoy the views of the dams and the city. What I didn’t know is that Hillside Dams would become the focus of rock climbing development in Zimbabwe.
After a great six years in Cape Town South Africa I decided it was time for me to move home. I had been spoiled for choice with regards to climbing so coming home to find that little to no climbing development has happened in the last 15 years was very disappointing. The development that had happened was at least a five hour drive away and mostly scary run out slab climbing on sketchy pro and old rusty bolts from the 80´s. I think bolts back then were to keep you from dying and not from any kind of injury. The climbing community was almost non-existent with only a couple climbers. The more I visited the Hillside Dams the more I realized the potential of the park to become a great rock climbing destination. It has a high density of climbable rock, natural beauty and being within the city, access is very easy. These factors inspired me to form Zimbabwe Rock Climbing (ZRC) in 2014 with a couple friends. ZRC´s main initiatives are the growth of the local climbing community, sustainable development of climbs, documentation of climbs both old and new, promoting international awareness of climbing in Zimbabwe and negotiating access to climbing areas. 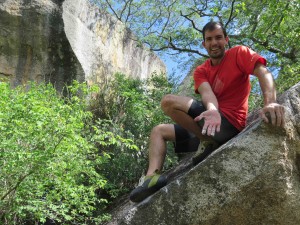 Derrick showing the cost of a hard send.

Since the formation of ZRC the climbing community has grown substantially as has the number of climbs, particularly bouldering. In January 2015 thirty new boulder problems were documented. Access has been negotiated with Hillside Dams to create a bouldering destination to attract more visitors in a responsible fashion. Because of the rapid development and the continuous upgrading and downgrading of climbs, the prospect of a continuously updatable guidebook is very exciting.