Backcountry Skiing and Snowboarding — a new adventure for rakkup

Over here at rakkup “World Headquarters”, our homes in Seattle, we are climbers and we love climbing. But like many climbers, we live near the mountains and love playing in them in a variety of ways, and we have winters to get through. And in the Pacific Northwest, we have plenty of precipitation which turns into an amazing amount of snow at elevation. 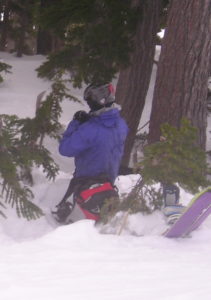 So, it’s only natural that Rob and Todd love to get out on the snow. While we both have skiing in our history, we’ve become pretty hooked on snowboarding. We can even claim to be pretty early splitboarders; here you can see a picture of Rob starting a transition in the Herman Saddle zone near Mount Baker in the winter of 2004-2005. What we can’t claim to be is snow experts. In December of 2005, we managed to demonstrate our lack of expertise by spending an unplanned overnight near Stevens Pass. (That epic led to our first purchase of a GPS, which eventually became the very unit we used to make the first rakkup rock climbing guidebook!)
We have had friends tell us for years that our app would be a great fit for backcountry snow. In the last year, two pieces came together to make that idea irresistible to us. The first is that our awesome partner, Wolverine Publishing, told us about the success and the quality of their guidebook Backcountry Skiing California’s Eastern Sierra. The book’s author, Nate Greenberg, was interested in the potential of his content combined with an app, too.
Meanwhile, Rob had taken a couple of snowboarding trips to different zones in Alaska, with Jamie Weeks as his guide. As Rob and Jamie became friends, Jamie wondered aloud about what a great guidebook app would look like for the ski terrain near his home in Jackson Hole, and expressed some enthusiasm for the project. 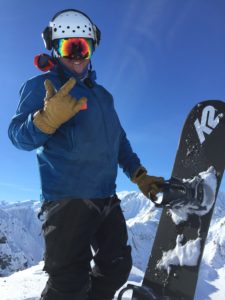 Nate is the director of the Eastern Sierra Avalanche Center, and Jamie is an AMGA certified snow guide and avalanche educator, well known for his work as Teton Splitboarder. What Rob and Todd lacked in experience and technical expertise, they now had in their partners. All four shared a passion for the project.
Together we bring you the newest update to rakkup, and our first two guidebooks for backcountry skiers and snowboarders: Teton Pass Descents and Backcountry Skiing California’s Eastern Sierra, a digital enhancement to the existing print title from Wolverine Publishing.
Lots of work went into developing guidebooks that are clear and easy to read, with symbology and maps that let you browse and choose quickly. We added topo maps with contour lines, a necessity in ski terrain. We are especially proud of our filtering feature that lets you apply criteria from your local avalanche center to eliminate runs in higher-risk terrain based on slope angle, aspect, and elevation and choose from the runs that remain. 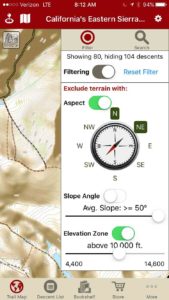 Best of all: Search for terrain, or Filter based on critical information factors (like those presented in an avalanche advisory).

We’ve already been told that this app is the most compelling and exciting backcountry ski app yet. Yet we know that this is just a beginning. For one, we have many more guidebooks already in the works, from respected and talented authors all over. (We are always looking for more! Let us know if you want to write a guidebook.) Secondly, we have plans we think you will love, from sharing your adventures with friends, to visualizing the latest reports and information to keep safe. We’ll be adding features to make this app a tool you won’t want to head into the backcountry without!
So, get out there and shred your own patch of pow! Give one of our guidebooks a spin and tell us what you think.
-Rob, Todd, Nate, and Jamie


Backcountry Skiing and Snowboarding — a new adventure for rakkup was last modified: September 25th, 2017 by rob