I have lost track of how many sunrises I have seen from Berthoud Pass. This means that I have also lost count of how many dawn patrols I have had at the Pass over the years. I don’t revel in the sub-zero and pitch black starts, but the day job and family schedule dictate these early mornings. When the sun rises over the Continental Divide it sheds just enough light on the surrounding terrain. From the top of the West Side you can see the Indian Peaks to the north, and the Mount Evans Wilderness to the south. The quick access and the deep snow of Berthoud Pass provide a solace from the harsh morning, and it is the camaraderie of the skiers in the parking lot that brings the warmth. Berthoud Pass is close enough to Denver to justify several laps and then a harrowing drive down I-70 to work. I often joke that after safely navigating the hazards of backcountry skiing, the most dangerous part may be the drive back. 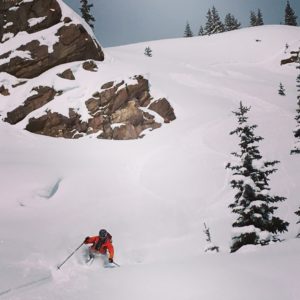 Backcountry skiers have been exploring Berthoud Pass for nearly one hundred years. Cars would shuttle skiers to the top of the Pass, and the pick them up at the bottom. Fast-forward to today and you can find hitchhikers on any given day at a number of trailheads. Those who are generous enough to pull over and give a hitchhiking brother or sister a ride to the top are then blessed with good karma enshrined in the history and tradition of skiing the Pass.

Berthoud Pass also has a rich lift access history. Berthoud Pass Ski Area operated discontinuously from 1937 to 2003. It was the first ski area in Colorado with a rope tow, the first two-person chair lift, and the first to allow snowboarding. The ski area also pioneered big mountain competitions in the late 1990s and early 2000s. 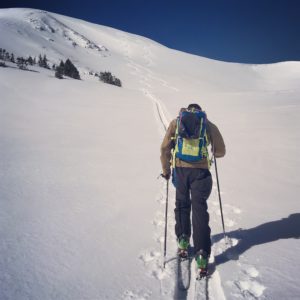 Quick access, a consistent snowpack, and endless discovery continue to draw backcountry skiers to Berthoud Pass. The east to west orientation of the Pass, located high above the Fraser River and Clear Creek valleys, attracts a deep snowpack benefiting from both northwest flow and upslope storms. In just over an hour drive from Denver, backcountry skiers have access to numerous trailheads leading into the high basins surrounding the Pass. From pre-work dawn patrols, to car shuttling, to all day epics, Berthoud Pass has an adventure for backcountry riders of all skill levels. This is why I love to ski here. I hope to see you in the Pass parking lot enjoying the dawn patrol as much as I do. 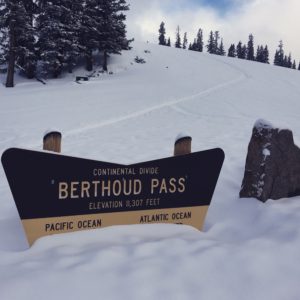 Just another two foot dump and the signs are gone.