Buy or rent Carderock here and save money versus purchasing from within our app via Apple or Google. It’s exactly the same guidebook, but offered at a lower price on rakkup.com. 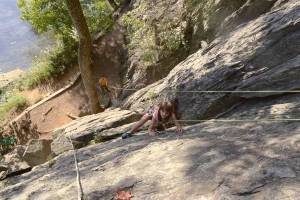 Carderock has been Washington, DC’s favorite escape for rock climbers for almost a hundred years, for good reason. Conveniently nestled at the edge of residential Washington, DC and overlooking the Potomac River, it’s a perfect stop for climbers looking for a quick fix before heading home for dinner. Because the crags are less than a hundred yards from the parking lot, and the Billy Goat C trail runs through the crag, access to the top and the bottom is quick and easy. It’s no surprise that Carderock is busy every night during the summer with campers, climbing classes, and regulars.

There is a pervasive myth that Carderock is a beginner’s crag. This myth probably took hold because of the presence of families with young children scrambling on the rocks. The locals know that the climbs are heavily sandbagged, rated by hardcore climbers decades ago before quartz holds broke off and the schist wore down to a smooth polish, turning Carderock into “the grease of the East.” In reality, Carderock has a breadth of difficulties. It has easy laybacks and fun chimneys for beginners. But, it also has many of the most difficult friction slab routes on the East Coast. Chris Sharma, arguably the best climber in the world, fell repeatedly on Evan’s Bolt Ladder (5.12d) during a televised National Public Radio interview. We have tried to address the pervasive sandbagging in our guidebook by re-rating some climbs as objectively as we could; this results in some surprising differences between our ratings and those historically known. Let us know what you think!

Carter Braun at the top of Trudie’s Terror (5.8)

The rock is a mica schist with quartz knobs arising from the Wissahickon bedrock formation. The schist is slick during the humid summers. Shoes stick best during the spring and fall when the air is brisk and dry. Because the schist is slick and friable, protection can slip out or break out easily. Therefore, lead climbing is not recommended at Carderock, and all its routes are top-roped and usually tied into trees or boulders.

To get started climbing at Carderock, you only need minimal equipment. If you’ve never climbed outdoors before, we strongly recommend taking a climbing class offered by Earth Treks, REI, or a local guide, because almost all accidents at Carderock have happened with inexperienced climbers. We recommend a 40 meter dynamic climbing rope, 30-40 meters of burly static line, and at least two additional locking carabiners. If you can manage to rock a pair of Carhartt’s double-duck pants and tie your anchors using bowline hitches, you’ll blend in with the old-school locals.

In our guidebook, we touch on Carderock’s storied history. It was the site of some of the earliest technical climbing in North America, dating to the 1920s. Herbie’s Horror, one of the first 5.9 routes in North America, is at Carderock. Herbie’s wife, Jan Conn, went on to participate in the first all-female ascent of Devil’s Tower, Wyoming. The Conns named climbs at Seneca Rocks, in New Hampshire, and out west. Many accomplished climbers and mountaineers climbed here who went on to first ascents at prominent peaks in the Tetons, Denali, and elsewhere. Noel Odell, who was the last person to see George Leigh Mallory alive on Everest in 1924, is said to have climbed at Carderock.

Today, Carderock is a section of the Chesapeake & Ohio Canal National Historical Park. Its continued conservation is because of the efforts of the Mountaineering Section of the Potomac Appalachian Trail Club (PATC-MS) and dedicated local climbers like John Forrest Gregory, the ‘mayor of Carderock.’

In creating our guidebook, we tried to make it comprehensive and easy to use. We include the main walls at Carderock but also less climbed areas, including Outlook Rocks, Easter Egg Rocks, Jam Box, and Vaso Island. We’ve also included photos showing you where to place your top-rope anchors, since climbs look much different looking down than they do when you’re looking up from the bottom. We hope that our guidebook helps you find the challenge you seek and that it adds enjoyment to your day. We’re going to keep working on our guidebook until we feel that all our photographs are perfectly clear and our beta is rock solid, even if this takes us years. And, if you see us around at Carderock and recognize us, don’t be a stranger – say hello!