Buy Mont Rigaud here and save money versus purchasing from within our app via Apple or Google. It’s exactly the same guidebook, but offered at a lower price on rakkup.com. 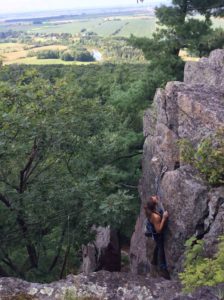 Climber on The Morning After, 5.8.

Mount Rigaud is a little hill on the outskirts of Montreal city. The hill has a small ski hill that is quite popular with area locals and beginners. But what attracts climbers to Mount Rigaud isn’t the skiing! It’s the great little crag that sits on the top of the hill.
People have been climbing at Rigaud since the early 1970’s. The rock has a few cracks, but most of the climbing was done on top-rope. Actually, quite a few lines that are considered sport climbs today were done on trad gear in their heyday. Some of these were even done using pitons before nuts became common. But, it wasn’t until the early 1990’s that Geoff Creighton put up some of the first sport climbs of the area. These climbs were a catalyst for what to Rigaud would be a transformation. 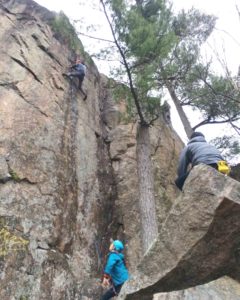 Sport climbing is now the norm for Mount Rigaud. With just shy of 100 climbs most of these short sport climbs, it’s not a surprise that Mount Rigaud is very popular today. Almost everyone climbs here in their first years. Most come back to grab the harder climbs or just for a bit of afternoon cragging. Now, thanks to the local climbers with support from the FQME, the older and dangerous hardware has been changed to today’s standard. And many more dangerous climbs have been made safer. Climbing at Rigaud is unique for the area. The rock is sharp. Holds are going to vary from monster jugs to small positive crimps with the assortment of sloping flats that you’re never sure if your hands won’t slip off. When the weather gets warm and humid it can feel slippery! 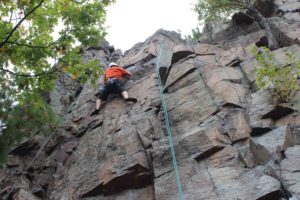 You’ll have to bring out a complete arsenal of techniques to climb here. Angles vary from slabs to slightly overhanging with climbs sometimes having small roofs to pass. Harder climbs can be powerful and thin. A good reach is a plus at Rigaud and very rarely is endurance a factor. But you’ll often need good footwork and route reading skills. Onsighting is difficult if you are climbing at your limit. But, if you can do the moves, you can do the climb! 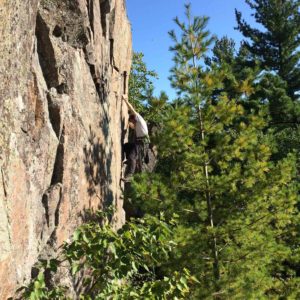 Peter Gernassnig on his climb Samson, 5.11b.

Close proximity to the city, easy access to the top of the cliffs and an abundance of easy to moderate climbs, these are all factors that make climbing at Mount Rigaud so popular. Add to that the great view of the Ottawa River valley, it’s easy to understand why people climb here.