Buy Keoma’s Oukaimeden bouldering guidebook here and save money versus purchasing from within our app via Apple or Google. It’s exactly the same guidebook, but offered at a lower price on rakkup.com. 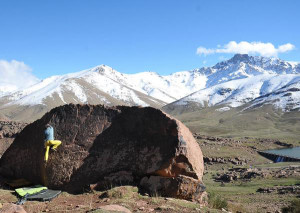 In the clouds of the High Atlas Mountains in Morocco rests a real bouldering treasure hidden from the climbing community for many years. Oukaimeden is the first bouldering destination in Morocco, and is just a one and a half hour drive from the cultural heart of Marrakech. Bouldering in Oukaimeden combines well with a road trip through Morocco or a city trip to Marrakech and is a cultural and exotic experience.

If you thought pioneering was only something done by pioneers in the twentieth century, you are wrong. At 2000 meters above the imperial city of Marrakech you feel the fresh air of nature and splendid views when you get psyched about a new problem you’re working on. Thousands of potential problems are located in the hills surrounding the little village of Oukaimeden. A true pioneer’s experience of exploring new boulders and sending new problems no one has attempted before you. 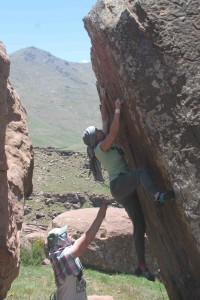 Oukaimeden is best visited in the spring months of March, through May and during the Autumn months of October and November. The summer months June, July and August can be hot and the mountains are, by then, covered with shepherds. The winter months December through February can be perfect for sending hard problems but at the same time can be frustrating with thick layers of snow. Nevertheless, the sun is strong enough to melt the snow from the boulders, even during the winter months, at a fast pace. 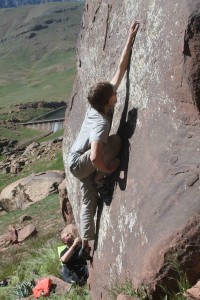 Leander Rutten balancing in The Bakery

Currently, Oukaimeden has three main areas where most of the problems are located. The lowest (2300m.) area, and probably the most flat one too, is called The Colony. A small area with a high density of documented boulders from balancy plates to high balls and seriously overhang cave problems. The Colony is a 7 km drive from the village and is located in a hairpin turn and provides spectacular views over the lush Ourika valley.

The most developed areas are The Bakery & Rivers of Babylon located near the small village of Oukaimeden. At the northwest side of the road The Bakery is covered with the most problems ranging from v0 to v6. There are also potential hard highball problems in this area. Rivers of Babylon is at the north east side of the river and is a long stretched area at Atlas crest line. Don’t wait, book your ticket to Marrakech today and go send these tasty problems.