Buy Bouldering Moore’s Wall here and save money versus purchasing from within our app via Apple or Google. It’s exactly the same guidebook, but offered at a lower price on rakkup.com. 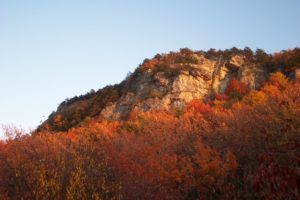 The quality of climbing at Moore’s Wall is superb. As John Sherman said in his Stone Crusade, the rock is “bullet-hard quartzite”. Large blocky features that force opposition as well as the small razor sharp crimps are common and found in many of the area classics and test pieces such as Stickman, Proper Modulation, The Nick and Tsunami. Further adding to the experience is the mental game of unlocking beta. Large, seemingly good features from the ground, climb very different than they appear and makes for some thought provoking beta decryption. The high-quality rock, its texture and features along with the vision of the locals has produced a movement and style unique to the Southeast. 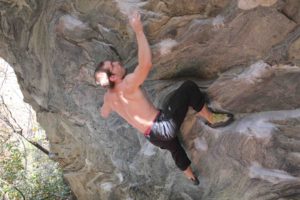 Located inside Hanging Rock State Park in North Carolina, Moore’s Wall is one of many state parks maintained by the North Carolina Parks division. It is part of the Sauratown Mountain Range (1,700 feet to more than 2,500 feet in elevation). It is comprised of four primary sectors, The Main Area, The Valley, The North End, and Two Mile. One of the great things about Moore’s is that the sun exposure is different for each of the areas. During some of the coldest months you can still climb at Two Mile since it is south facing and will always be warmer than the other areas. On the flip side, if it is warm out you can climb at The North End, which is always ten or more degrees colder than The Main Area or Valley. However, a cooler temperature if it is humid out (and this is North Carolina) will just mean the boulder will feel wet. We don’t make the rules here. 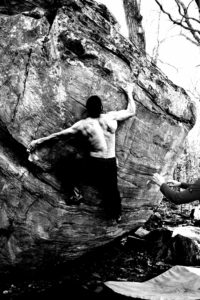 As you might expect, the best time of year to climb here is when it is cold and dry. Although you can theoretically “climb” year round, the heat, poor friction, smog of bugs, unreasonably large spiders, and rattle snakes during the warmer months are a deterrent for most climbers. The climbing season can start as early as September if the temperatures stop exceeding 80 and 90 degrees and continues until it gets unbearably cold at the dead of winter. Climbing picks back up in February or March and continues through May/June. Although with global warming you can occasionally climb throughout the so-called cold months. In what roughly correlates, in our calendar, to the month of December, there is a yearly sasquatch migration. They can be quite territorial. When confronted, avoid direct eye contact; it may be considered an invitation or a challenge depending on the gender of the sasquatch. Be especially careful on a lunar leap year.