I moved to Mammoth Lakes, CA in 2000 right after finishing a degree in Nature & Culture with a GIS emphasis from UC Davis. As a kid growing up in Southern California, I spent a lot of time in Mammoth and the Eastern Sierra skiing and wandering around in the hills. Through my college years, we climbed our hearts out on Sierra alpine granite and sport routes in Owens Gorge. The goal: to run a GIS & technology consulting business out of some cheap housing and ski and climb my ass off. Sixteen years later, I am happy to say that I have been successful at achieving that goal, but the list of things that I want to accomplish has only gotten longer. 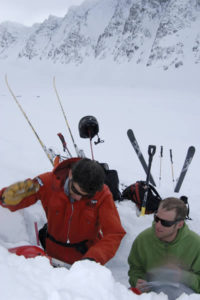 Nate Greenberg and Lorenzo Worster look at the snowpack.

As a new skier to the range, I was looking for mentorship and dismayed at the general lack of quality information that existed for this amazing mountain range. That is not to say that there were not resources, but in general, high quality avalanche forecasting and details on the lifetime of skiing opportunities throughout the Eastern Sierra was limited.

After several years of skiing and immersing myself in the community, I, along with a close friend, built a rudimentary online platform that was focused on sharing conditions information and trip reports to our growing community of backcountry skiers and riders. The appetite for what we were doing was surprisingly large, and we got a lot of encouragement to grow it. This ultimately led to the establishment of the Eastern Sierra Avalanche Center in 2006 which I helped form with a handful of committed local guides, snow professionals, and business folk. Now in its 11th year of operation, ESAC is growing and committed as ever to providing high quality information to help backcountry skiers and riders make good decisions in the Eastern Sierra.

In 2008, I set out to create a comprehensive and modern guidebook for California’s Eastern Sierra Nevada. After several years of skiing in the range, I was awestruck by the quality of skiing, and overall ease of getting into ‘real’ mountains – quickly.  I, together with Dan Mingori, gathered combined years of first-hand experience to write Backcountry Skiing California’s Eastern Sierra. In 2013, after five years of successful sales, we released the 2nd Edition with two goals:

My interest in writing a ski guide was more than just publishing popular descents and promoting this region. Rather, I was, and still am keenly interested in helping people make better decisions and terrain choices in the backcountry. I hoped that by providing the community with a variety of descents, classified by relevant characteristics, it would afford people options that they may have previously overlooked. While the 2nd Edition made inroads in this area, I had always wanted to do something more. 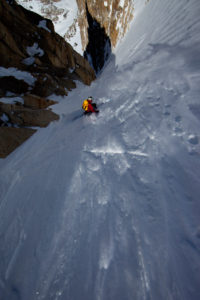 With my background in Geographic Information Systems, today I serve as Director of Information Technology for Mono County & Town of Mammoth Lakes, CA. Through my daily work, I spend a lot of time thinking about the intersection of information and technology, particularly as it relates to open data and geography, and how we consume information and use it to make (hopefully) good decisions and improve the world around us. I have also always had a keen interest in the intersection between sports and technology, and especially considered how important technology and information were in pursuits such as backcountry skiing where timely decisions are critical and immediately relate to safety and quality.

The thing that has long baffled me, however, was how generally lacking the winter sports industry was with respect to technology. Surely there had to be a lot of other geeks out there like me who loved to ski – so where were all the apps? Today, even when there are more mobile devices in the world than personal computers, the avalanche industry is still struggling to figure out what it needs, where it should be headed, and how best to deliver that to users  While there is an ever-growing landscape of digital tools pointed at improving information dissemination and decision making, for the most part we struggle to figure out the best (and unified) path forward. This is not to say that there aren’t promising approaches out there – MountainHub for real-time data sharing and trip planning, AvyLab for data collection, and a litany of industry-driven mobile-friendly utilities to help us access avalanche center data.

About a year ago I was introduced to the small, Seattle-based app start-up, Rakkup. With a passion for climbing, the two partners at Rakkup set out a few years ago to transform the guidebook industry, and send it kicking and screaming into the digital world. Over the past 12 months, we have set out to rebuild their digital guidebook platform to accommodate winter backcountry content. The result of that effort launched on December 1st, 2016 with Rakkup v20 for iOS and two guidebook titles – Backcountry Skiing California’s Eastern Sierra, and Teton Pass Descents. As of this writing, we are getting ready to release a third title: Backcountry Skiing: Crested Butte, Colorado by Andy Sovick.

The catalyst for this project and moment defining my path forward came to me while visiting my wife in Boulder, CO last year. Being a Sierra skier, I am naturally terrified of skiing in the Rockies, while simultaneously being drawn to the impressive steep terrain of places like Rocky Mountain National Park. As a trained and responsible backcountry skier, the natural thing to do was to pick up Mark Kelly’s guidebook and thumb through it, highlighting the obvious descents and making a short list for the weekend. The real challenge, however, came when I tried to apply the information coming out of the CAIC to the actual terrain that I wanted to go ski, and seeing if those nasty persistent weak layers lined up with my list.

It turns out this is a challenging pursuit, even with all the resources and technology we have access to. Despite pins dropped on interactive maps showing recent observations, and some of the best avalanche forecasting in the US, relating information coming from avalanche professionals to the real-world terrain that we want to ski is a real chore. Especially as an outsider. Sure, the forecast says “avoid north facing terrain above 10,000,” but who in today’s world ventures out randomly to seek out non-north facing terrain below 10k? We want a list of objectives (with directions and definitions) of where we can, and should go. Furthermore, I wanted to know more about the descent that was being referred to in observations posted by Center staff or the general public. How steep were the Dream Shots? Was it a beginner or advanced ski? What kind of exposure was there? Oh, and how similar or different was it to the five other things I was looking at in the book?

All of these things drove my objectives and design philosophy for the initial product launch of Rakkup v20:

We hope, and honestly believe, this app will change the way terrain selection is taught, while simultaneously empowering users with the ability to quickly and easily apply everyday conditions to make solid terrain choices. We would also love to hear your feedback on how to make the product better and what kinds of things  you would like to see added in the future. Feel free to contact me with any questions or thoughts at any time.