Buy Norm & Matt’s Powerlinez guidebook here and save money versus purchasing from within our app via Apple or Google. It’s exactly the same guidebook, but offered at a lower price on rakkup.com. 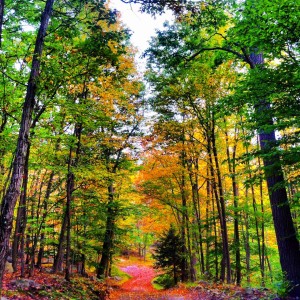 If you are one who is interested in history, then the Powerlinez might be just the place for you. Let me forewarn you – it’s not a place for solitude or escape from the influence of man. Hundreds of years ago, before power plants and landfills, the local Ramapough Indians roamed these hills and especially the Torne Valley region, which is the same valley we climb in today. Rumors of artifacts and old settlements have dated as far back as we remember.

Now, Powerlinez rock climbing is the beginning of a new history. It is the first area in Harriman State Park to be legally opened to climbing. Thanks to all the hard work of the Torne Valley Climbers’ Coalition (TVCC) in 2013; they worked together with the Palisades Interstate Parks Commission (PIPC) to work out a no fee, waiver agreement to get climbers into the area and doing what they love most!
The question is – how long have climbers been climbing here and what history are current climbers going to leave behind? 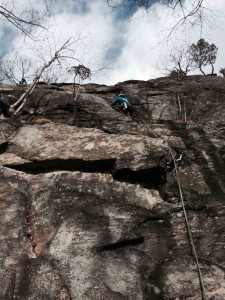 Over the last two years, development has exploded in the Powerlinez climbing area. There used to be a total of 100-200 boulder problems and roped routes, and now the first release of the rakkup guidebook “Powerlinez” is poised to have 100+ climbs alone. We’re barely exposing a quarter of the total current routes! When the hardest climbs used to top out at 5.10 or V4, local hard climbers are slaying 5.12s and V9s every month. This summer, during our two year anniversary, is only going to rein in more hard and bold climbing. 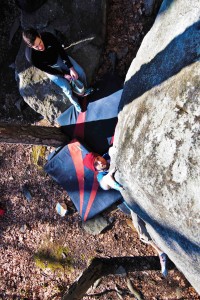 Matt on Indulge the Bulge (V7)

This development has spread as whispers around the local climbing gyms, and a couple local Gunks’ celebrities – Russ Klune and Al Diamond – showed us some hard boulder problems that they messed around on in the 90s. When we thought we were getting first ascents, we realized that we still live in the shadows of the true masters of their craft.
How can you not expect routes to be climbed in an area that’s only an hour away from New York City? With so many people, it’s no surprise that a climber or two have wandered through the boulder fields of the Powerlinez. After all, Storm King Mountain was one of the first rock climbing spots in the Northeast in the 1920s, and that’s still another half-hour north of the Powerlinez. 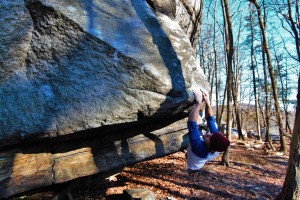 Matt on Indulge The Bulge (V7)

So here we stand, a group of local climbers fielding the interest of an even larger community further south in the metropolis of the city. They all want a taste of local climbing, but what can happen to an area with a new guidebook? Thanks to rakkup, we’re sure that amazing things will happen. With an interactive trail map to stay on the right trail, and waypoints so that you don’t get lost, rakkup is helping climber’s not only follow the rules, but make the most of their climbing experience. 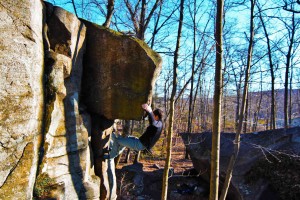 Here’s what we hope: We hope harder climbers will come out and project new stuff. We hope more 5 star problems will become uncovered from their mossy crags by all these climbers. We hope that there will be a responsible stewardship of the area; leaving a legacy of respect for the area, its history, and the locals.

We know that this is the beginning of a long and beautiful history between climbers and state lands. While we look forward to the next hand hold to climb on, may we all remember where we came from, and as more areas open up in New York State Parks, I hope we can remember the little area that started it all. The little yeast that leavened the whole dough: The Powerlinez.

Learn more about Norm here, read more from Norm on his and check out the Powerlinez Facebook Group here.
PowerLinez – by Norm Rasmussen was last modified: October 9th, 2015 by todd