Buy Iowa Limestone here and save money versus purchasing from within our app via Apple or Google. It’s exactly the same guidebook, but offered at a lower price on rakkup.com. 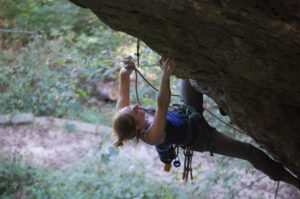 Carolyn Coffey on the OS of Flash 5.11b

Finding rock climbing in the Midwest is not easy. Believe it or not a nice little area can be found in Eastern Iowa next to corn and hog farms near the town of Monticello. Three separate areas: Pictured Rocks, Indian Bluffs and Ozark Wildlife combine to form an area referred to by many as Wild Iowa. While unexpected, the climbing can be quite good and many leave satisfied that a stop wasn’t a waste of time. 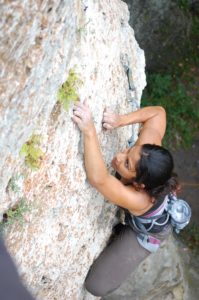 Khadija Shahid at Windy Point 5.11a

Formed in ancient seas 2-300 million years ago, the Silurian Dolomite was revealed by erosion and contains some incredibly formed features. One might encounter pockets, crimps, combos, slopers, jugs and even fossils on route. While the Iowa climbing history predates the surge of bolting in the early 1990’s, it was the advent of the sport climbing revolution that was responsible for many of the rock climbs in Iowa. Over 100 bolted sport routes offer most styles of limestone climbing from technical slabs to steep jug hauls from 5.6 to 5.12. Trad climbing can be found as well near the pocketed faces but the Iowa Limestone guide will focus almost solely on sport climbs. Wild Iowa can provide a nice fix for regional climbers who can’t make longer drives to more popular/larger areas. 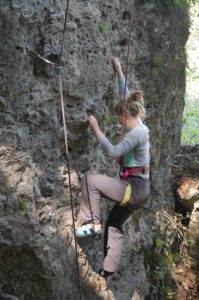 Fall and Spring are the best seasons to climb at Wild Iowa, considering the cold winters and the humid summers. Occasionally, one can get a blue bird day in winter that is warm enough to enjoy South facing climbs. Also, many hard core climbers brave the humidity and insects to get some pitches in during the summer months. That said, the best days are found once the stifling heat abates in September -November or during the Spring season in late March – May. It should be mentioned accessing the areas in winter can be difficult. There is a gate that blocks car traffic to Pictured Rocks during the winter months, however foot traffic is still allowed.

The impetus for this guide came simply from meeting travelling climbers over the years,that had no idea how to find entire areas or what the climbs were rising before them. What better way to aid these climbers than to combine a GPS map to all climbs with the best descriptions of the climbs available. We sincerely hope you have fun climbing Iowa Limestone and that this guide aids your enjoyment!