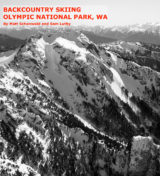 For almost 8,000 years native people have lived around the Olympic Mountains. The Duwamish of the Salish sea call them ‘Sun-a-do’, and the ancestors of the Klallam have been living, hunting and gathering in the high mountains since time immemorial.The Spanish sailed along the coast in 1774 and named the highest peak, Cerro Nevado de Santa Rosalia. In 1788, the British Explorer Roger Meares renamed the highest peak, Mt Olympus because it looked like the ‘abode of the gods.’ and just like that the Olympic Mountains became part of the European map.The 1890s saw climbers begin ascending the summits of Mt. Olympus, with the main summit finally being climbed in 1907. Deer Park became Washington’s premier ski area in the mid 1930s. The Hurricane Ridge road was built in the early 50s and the ski area moved from Deer Park, establishing a new winter recreation center for the Olympic National Park. Ski touring began along the roads of Deer Park and Hurricane Ridge and shifted to the Bailey Range and the higher peaks in the 1990s.